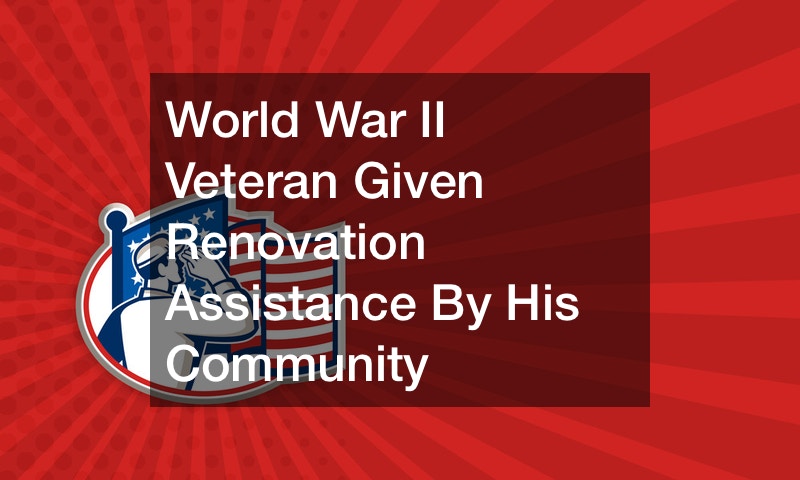 World War II Veteran Given Renovation Assistance By His Community

Many American veterans served in World War II without ever thinking that they would be given service in return. Alfred Guerra was one of those soldiers that stepped forward when not only his country but the world was in need. As time passed, however, he became the person that needed the most, and he required the help of others. Like many other Americans, Guerra lived in a home that was in desperate need of renovation, and as a senior citizen, he was unable to physically and financially take care of them himself. The reality is that many American seniors are both unable to physically handle the demands that come with making repairs to their houses, but incapable of meeting the financial demands that come with repairs. Most senior citizens no longer work, and certainly Guerra, well into his 90s, is incapable of working consistently.

Guerra’s family and friends did attempt to assist in order to ensure that he was able to remain in his original home. However, over time these renovations became more and more difficult, and with that, the house became more dilapidated. Guerra’s son was one of the key individuals who contributed to repairs and renovations and was a part of a project that involved tearing out much of the home’s interior during its initial remodel. Sadly, Guerra’s son passed away of cancer before the renovations were completely finished. This meant that the house was completely remodeled. This, among other factors, meant that the house eventually became completely uninhabitable. Not only was Guerra unable to stay in the home for the long term; it became literally incapable of housing him for the long term.

This is what led Maria, Guerra’s daughter, to seek help on social media. She utilized Facebook to reach out for assistance in keeping her father’s home in the family and inhabitable for him. Not only is this remarkably important on a practical level, giving Guerra a space of his home to stay; it’s also remarkably important for his morale. A lot of elderly individuals find it difficult to keep their spirits up, and therefore their mental and physical health solid when they don’t have spaces of their own. It’s no wonder that Guerra’s children place so much emphasis on ensuring that he is as independent as possible.

Fortunately, Maria’s messages did not go unseen and unanswered. A number of different veterans’ groups saw the message on Facebook. They had reason to be concerned about Guerra, and for that matter to admire him. Guerra did his time as a serviceman and contributed greatly towards the American war efforts. During his time serving in World War II, Guerra was deployed to the Philippines, earning both a Bronze Star and a Purple Heart for his heroism. These types of rewards, given for both bravery and in recognition of wounds obtained during war, are greatly admired by veterans’ groups. He was not simply working on installing helicopter parts in aircraft in need. He was actively diving into the action and even become wounded.

But it wasn’t enough for these organizations to become involved with the project. Unfortunately, these renovations took place during a particularly challenging year. This did certainly provide challenges that could not possibly have been foreseen. Guerra was moved to live within Maria during the initial renovation of his property. But just as home remodeling contractors got underway, the COVID-19 pandemic began. Not only did this naturally make it impossible for contractors and other workers to begin to work consistently; it also temporarily shut down many of the stores from which they would acquire building materials and equipment. Naturally, this made it difficult, though not impossible, for repairs to move forward with Guerra’s property.

Luckily, these repairs were only delayed rather than put off permanently. This month, renovations began again on Guerra’s property, with workers moving forward with the project. Many of these workers were not traditional employees but in fact, volunteers who had offered their time free of charge. And in turn, many of these volunteers were veterans as well. Many of them had served in three foreign conflicts. These included Iraq, Afghanistan, and Vietnam. The workers got together to begin working on the next phase of the project, anticipating the hard work ahead but excited to make it possible for Guerra to live on his own again.

Of course, while it was important for volunteers to donate their time, they certainly weren’t the only ones to make donations to the project. Additionally, the SRS Raise the Roof Foundation donated an entire new roof as a part of renovations being made. This was hugely impactful, as renovations can be quite expensive. Typically, the cost of a new roof could be anywhere from $5,000 to $10,000. This amount of money can be quite difficult to raise in a timely manner. Therefore, taking a home from being dilapidated to being turnkey can be extremely expensive, and therefore extremely time-consuming as well. While the Raise the Roof Foundation has made one important part of the renovations possible, there are still a lot of other steps that need to be covered both physically and financially.

As the Guerra family and volunteers move forward with repairs and renovations, they are hoping for assistance from additional donors and helpers. Guerra’s property had been heavily gutted before Guerra’s son died and the project was initially stalled. Therefore, quite a lot needs to be replaced. One thing that needs to be covered is a new HVAC system. Obviously, the property cannot be made comfortable and habitable for Guerra without one. Furthermore, additional fixes need to be made after an HVAC system is supplied. The Guerra family is hoping that this can be done in part through the use of a GoFundMe page. Their goal is actually quite modest, hitting just $5,000.

This $5,000, as well as any money that could potentially exceed it, could be pushed forward to cover the employment of workers, as well as building materials like wood, brick, and cement. Additionally, it can cover important legal aspects of remodeling and renovating a home, like permit acquisitions. It can be incredibly difficult to move forward with repairing a home without this being taken care of first. It’s estimated that overall, the repairs will take at least a month.

Above all else, Guerra wants to move back home. Despite the house initially becoming too dilapidated for him to live within, he misses the home that he knows and loves immensely and has told his family that if he could he would live on the property in a tent. This is in part due to the memories made there, which he treasures. In particular, he wishes to take care of the roses that he planted in his garden in honor of his late wife, Emma. Although he’s happy to live with family while waiting for repairs to be done, like many senior citizens, he will be most happy when he’s back home. Guerra is quite fortunate to have a family that is so loving and attentive, and able to give him the attention that he needs. Many American seniors are forced to live in assisted living facilities as they grow older.

Some of the potential steps of remodeling Guerra’s home will include repair and remodeling the bathrooms and kitchen with the home. In this day and age, these are not only seen as utilitarian but some of the rooms through which style can be showcased in a house. It’s important that Guerra’s home is not only equipped to house him but to act as a genuine home that he can feel comfortable in and enjoy. This can be done in part by placing an emphasis on adding a personal stamp to the home, ideally accommodating Guerra’s personality and likes. Certainly, it’s clear that Guerra does place a good deal of emphasis on sentimental value. Ideally, this will mean that the home will be repaired without taking away the personal touches that mean something significant to him, like the roses in his garden.

As the kitchens and bathrooms are renovated, it’s also important that practical issues are taken care of. Oftentimes, plumbing repairs can become quite expensive, which means that it’s all too easy for renovators to attempt to save money by working with more “affordable” contractors to insulate pipes and cover other plumbing repairs. But the fact although some contractors may offer their services for less, this doesn’t mean that those in charge of renovations should take for granted that these deals are worth it. In fact, if a contractor offers their services for significantly less than their competitors, this could be a sign that they are cutting corners in terms of their practices or their materials. They should be questioned heavily before those commissioning the projects in question move forward. For example, those working on the Guerra project can know that those working with the Raise the Roof Foundation can be trusted. But other individual contractors should be questioned heavily before renovations move forward.

Materials should also be inspected carefully before they are used. During a glass and mirror installation, it’s all too easy for subpar materials to nearly ruin a project entirely. Fortunately, a lot of remarkably great renovation and building materials can be sourced rather affordably. Charitable organizations like Habitat for Humanity offer great materials for home improvements at affordable rates. When projects like the one renovating Guerra’s house utilize these types of materials, they are not only able to get important work done; they are able to contribute further to charitable efforts themselves by investing in materials that are sold for charitable purposes.

Of course, the home itself is not the only thing that will need repairs. The property itself will also need to be repaired in many ways. Depending on how much space is left after the house is repaired, as well as how much money is available to cover those repairs, an outdoor space could be further provided through the use of exterior tile in creating a patio. Outdoor space is obviously important to Guerra as he needs to regularly tend to his garden and especially his roses. Fencing may also need repairs, as well as the lawn and garden themselves. This can make the space not only more habitable but more livable for Guerra, allowing him to truly enjoy himself in a way that he wouldn’t be able to if he lacked an outdoor space.

Guerra is not the only veteran who will need these types of renovations and repairs to be made over time. It’s incredibly important that veterans are taken care of, with their times serving and protecting the American people being recognized for the long term. As these veterans grow older, it’s obviously difficult for them to take care of their homes themselves. Therefore, they need to be taken care of not only by those closest to them, but their communities at large. What is currently happening for Mr. Guerra and his family illustrates exactly the type of community support that all veterans deserve. Hopefully, his home will soon be fully repaired and he will be able to move forward